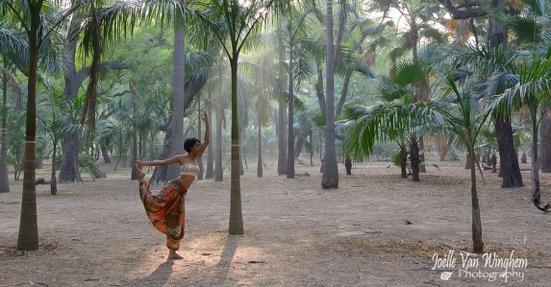 Yoga postures are often named for mythological figures in the hope that practicing them might help us attain some of their heroic attributes. The story of the fish Matsyendra highlights the virtues of concentration and stillness—and offers a parable for the transformative power of yoga.

According to the ancient tale, the Hindu deity Shiva was on an island, explaining the mysteries of yoga to his consort Parvati. A fish near the shore remained motionless and listened with rapt attention. When Shiva realized that the fish had learned yoga, he blessed it as Matsyendra, Lord of the Fishes. The fish then took a divine form, came on land, and assumed a seated spinal twisting posture that allowed him to fully absorb the teachings. Yogic lore credits this twist, called Paripurna Matsyendrasana (Complete Lord of the Fishes Pose) with such important benefits that it is one of the few asanas described in a seminal 14th-century manual on yoga called the Hatha Yoga Pradipika. This classic guide anoints Matsyendra as the first human teacher of hatha yoga and says that the posture dedicated to him fans the gastric fire, cures all diseases, and awakens kundalini shakti, the dormant feminine energy coiled at the based of the spine in the form of a serpent. Ardha Matsyendrasana (Half Lord of the Fishes Pose) is a milder version of this twist.

The term Ha-tha literally means “forceful.” However, Patajali in the Yoga-sutras states that a posture should be “steady and comfortable” and is achieved through “relaxation of effort” (prayatna-shaithilya). The inner meaning of the term hatha concerns the two syllables Ha- which is the seed mantra for sun, and Tha - which is the seed mantra for moon. Hatha yoga refers to the balance of the sun and moon, and then the opening of the Sushumna nadi, The central channel of energy in the subtle body. Hatha yoga is composed of several classes of practices: Shat Kriya(six cleansing processes), Asana (postures), pranayama (expansion of prana), mudras ([spontaneous] gesture), bandhas (lock) and kriyas(process).

Hatha represents opposing energies: hot and cold (fire and water, following similar concept as yin-yang), male and female, positive and negative. Hatha yoga attempts to balance mind and body via physical postures or "asanas", purification practices, controlled breathing, and the calming of the mind through relaxation and meditation. Asanas teach poise, balance and strength and are practiced to improve the body's physical health and clear the mind in preparation for meditation

Yoga consists of 12 basic asanas (poses), however in totality there are 8.4 million. An Asana is not a particular posture, but a state. Within the word asana itself are the connotations of strength and firmness, as well as the connotations of pleasantness and comfort. This is the balance we are trying to achieve, strength and flexibility, not only in the physical postures, but also in our mental state.

In the beginning, the physical aspects of the postures will affect us the most. In time, and as we progress, we will become more aware of the flow of prana, life force, moving through the body. As our practice evolves, these subtle, but deep movements reawaken our awareness and control of our body, leaving us feeling both relaxed and full of energy.

While yoga is a great practice that is accessible to all (including seniors and the overweight), it is not a quick fix. It takes time and commitment to lengthen and strengthen our muscles. A side effect to practicing, is that yoga allows for limitless physical development and personal growth.

Breath:
A person has one thought on inhalation and another on exhalation, so that the rate of breath determines the number of thoughts a person has. Greater number of thoughts (a faster breathing rate) decreases concentration because there are so many thoughts going on. The breath, body and mind are so closely linked, a change in one brings about a change in the other two. By developing control of the breath in certain ways, beneficial changes can be seen in the mind and body.

Some days we may have trouble with the balancing postures and notice that we are having trouble juggling all the different things in our life.  On another day, we may discover we’re not as flexible as the day before, perhaps we've become a bit less fluid in our thinking or actions, resistant to stretching our self a bit further. Not to worry...its about acceptance...